Aisling traditionally goes to Mulranny around Christmas time, as the guests of Jerry Cowley TD; but this year our usual holiday cottages in the village were already leased out to the workers in the new Park Inn hotel. So, we stayed at Achill Sound, 12 miles further west.

The news wasn’t good. In fact, it got worse each day. The ship’s officers had barricaded themselves in the engine room now and Maureen and Liz in the Liverpool office, who had booked our sailing tickets and accommodation, couldn’t tell us when the dispute would be over. Negotiations were going on and the union was hoping for a resolution before the ninth of December, which was our departure date. The media in Britain had hardly reported the story at all but it was a watershed in industrial relations in Ireland. It seemed the whole country was supporting the Irish Ferries workers who had been made redundant in favour of cheap (very cheap) labour from Eastern Europe. The facts became wilder and harder to believe the more you heard about the dispute. Could they really register the fleet in Cyprus, yet carry on as before, as a major Irish carrier operating out of Irish waters? Were the new Latvian workers really working for one-third of the current staff’s wages? Were they really expected to work 36-hour shifts? Did they really bring the new recruits on board as foot passengers accompanied by security (thugs/bouncers) staff to attempt to take over the ships?

I was in Dublin the week before our trip, at a conference, and on RTE’s Question Time programme I saw the Governor of the Bank of Ireland say that it was the duty of Irish Ferries to get the biggest profits they could for the shareholders, regardless of the cost to the workers or the country. And the editor of a leading Irish current affairs magazine agreed. The studio audience were totally in disagreement with this view, but these sinister hard-faced business school graduates seem to be in the driving seat these days and I wasn’t holding out much hope for the ferry workers. What was going on in Ireland? You got the feeling that if the Famine happened again the response from these neo-leprecons would be – it’s every man for himself and pull up the drawbridge.

In the end, Maureen rang me from Liverpool the day before we were due to leave and told us negotiations were still going on and the Ulysses would not be sailing on the morning of the 9th. However, we had already seen the writing on the water and had booked with Stenaline ferries. Our cottage bookings were still valid and a refund would be paid to us for the ferry bookings. The Stenaline ferry left 15 minutes before our original booking from Holyhead and arrived in Dublin port at the same time so there was little difference; although I can’t see us ever travelling with Irish Ferries again.

Naimh Collins opened the cafe in her home in Dublin for the 16 of us on the Saturday morning. So, after our safe arrival at Dublin port we all tucked in to porridge, the full Irish, toast, brown bread and plenty of tea and coffee. Afterwards, we rolled up our sleeves to do the dishes but only had to load the dishwasher. We stood outside in the early dawn saying our goodbyes to Niamh, her mother Maire and their friend Frank, who asked us to remember him to Jack Daly in Daly’s pub in Mulranny, whom we knew well from previous visits. We found out later from Jack that Frank was his commanding officer in the Irish army and he and Jack had traveled the world together with the Knights of Malta on UN peace-keeping duty. Although I had only met Frank briefly, I could still sense his leadership qualities and felt that men would follow him wherever he led. As it was, at a quarter to eight he whispered in my ear that Niamh had to be at work in the hospital in Beaumont at eight and I hopped to it, getting the lads into the buses in double-quick time, delegation being the secret of good leadership. 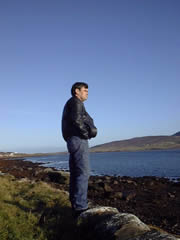 We had two new volunteers with us this time around. Joe, who is an old friend of mine and has always been fascinated with Aisling, is a writer and actor who has been working for the last few years with homeless people in Croydon. We were a bit short of numbers on this trip as other volunteers couldn’t get the time off work and Joe jumped at the chance to come. Avril had applied for our recent vacancy for an outreach worker but was unsuccessful. After the interview Avril emailed me saying she was disappointed not to get the job, but could she volunteer with us? We asked her to come on this trip for the first few days, as Charlie had to be at a wedding on the first part of the trip and would be arriving on the Tuesday at Knock airport. Neither Joe nor Avril were able to drive, so myself and John drove the whole way there and back in our separate minibuses. We have done this many times but it would be good to get some new volunteers who can drive. There are many big strapping men in Aisling who can drive any kind of farm machinery or plant machinery but have no driving licence. Most of our women volunteers do drive but for some reason the men can’t (is anyone paying attention out there?). Luckily John and I love driving and tend to commandeer the wheel most of the time, anyway. John would travel from one end of the country to the other offering sight seeing commentary and history lectures on the way. He once had a job as a tour bus guide when he first came to England, travelling around stately homes but was given the sack after he diverted too often from the script, denouncing the aristocracy of England for their crimes in Ireland.

Heading for Mayo, relaxed and full after a fine breakfast, we arrived in good time. We passed through Mulranny around one o’clock and called into St .Brendan’s village to visit Jerry Cowley and his wonderful enterprise there. As we approached I gave Jerry a call and he said that he would meet us at St. Brendan’s. Walking into the centre, we said hello to all the workers there who we had met over the years and Jerry himself was there to greet us.
’Come through’, he said, ‘your lunch is ready’.
And so it was…three full courses. Jerry spent the next hour with us catching up on our activities and telling us about his own high profile goings-on. Jerry is now a TD and one of the most active in the Dail. He also runs his GP’s practice (although now mostly in a hands-off fashion) as well as developing St. Brendan’s and the Safe-Home national repatriation scheme based in Mulranny.

Later that afternoon we arrived at Achill Sound. Because of the shenanigans with the ferry we only had the phone number for the head office of the holiday company in Dublin. And it being Saturday there was no answer to our calls. We had to locate Margaret, the local agent, to get the keys to the cottages we were staying in. Asking around the village we managed to get a phone number but the answer machine said she was away for the weekend. We managed to find the cottages alright but there are about thirty of them. Which were ours? They all seemed to be deserted except for about five, which had cars with Lithuanian number plates parked outside. The Lithuanians who were home didn’t know Margaret, they had leased their places from an agency in Vilnius. Eventually, a man with a New York accent stopped his car and offered to help. He slowly got out of his car and tried a few houses, checking under stones for the keys. He found four keys that way and said, ’These must be yours’ and off he went. Well, they were now. So we divided the houses into fours, with a worker in each, and settled in. However, there was one more hitch though before we could properly relax. They were fine big houses with lovely airy high ceilings and three large bedrooms but two of them only had 3 beds altogether – all doubles.